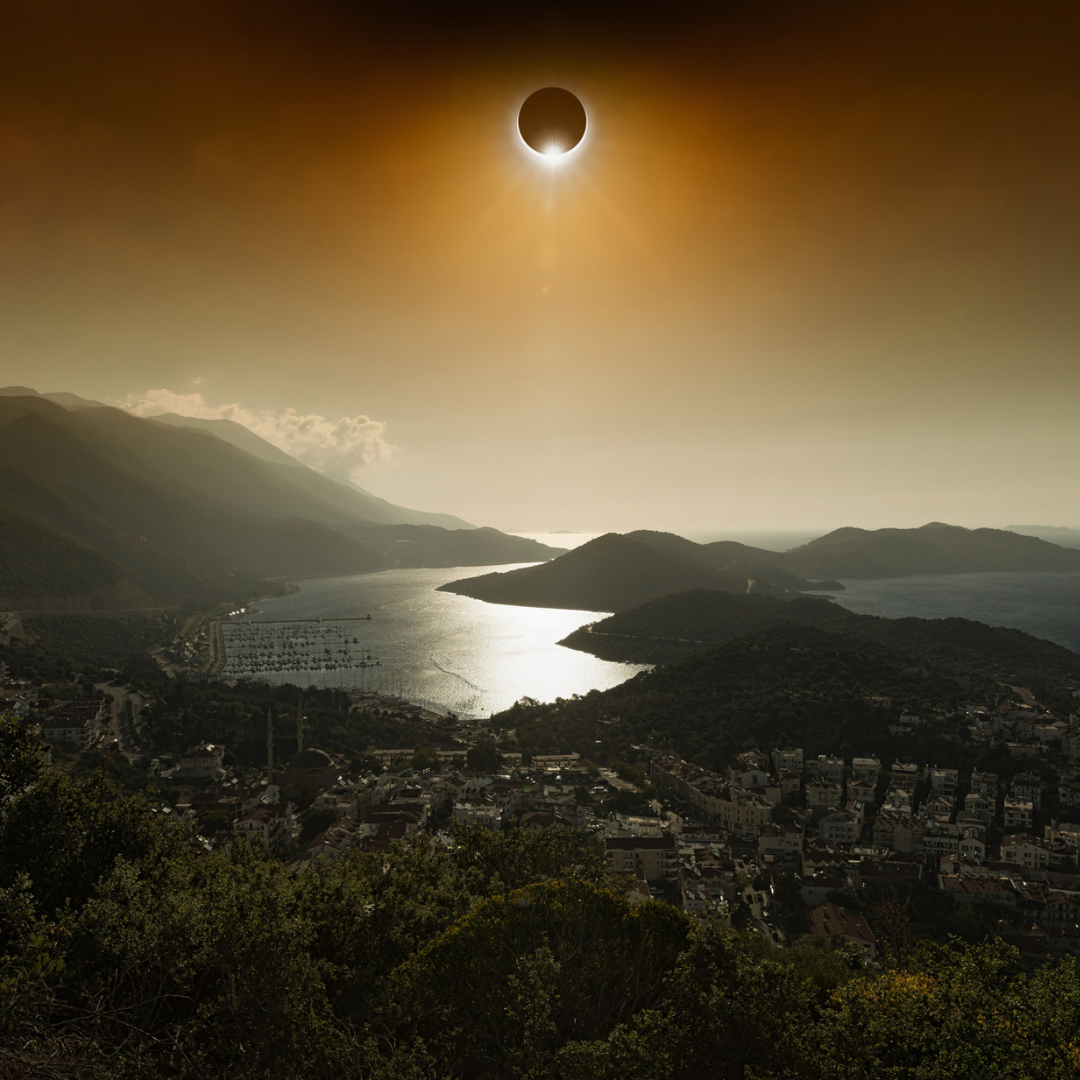 There is a total Solar Eclipse tonight, this Friday (Saturday for anyone in increasing eastward time zones), December 3rd at  11:43 pm PT (2:43 am ET). This new moon at 12 degrees Sagittarius on the lunar south node creates a total solar eclipse.  At the south node of the moon, the dragon’s tail, this eclipse symbolically invites us to release a worn-out idealistic belief or philosophy.  Do you have a good understanding of what idealism is? Here is a definition: Idealism is the metaphysical view that associates reality to ideas in the mind rather than to material objects. It lays emphasis on the mental or spiritual components of experience and renounces the notion of material existence.  One definition in the Merriam-Webster dictionary of idealism is a theory that only the perceptible is real.  If you are an individual with a rich inner world and relationship with the intangible of life but have a rooted sense of living with real expectations and clarity there is less likelihood to be led astray by some ideal that is baited for you to align to or follow.  A spiritual life that lacks roots in the material world increases the soul’s vulnerability and sets a frame of unrealistic expectations of what is possible. 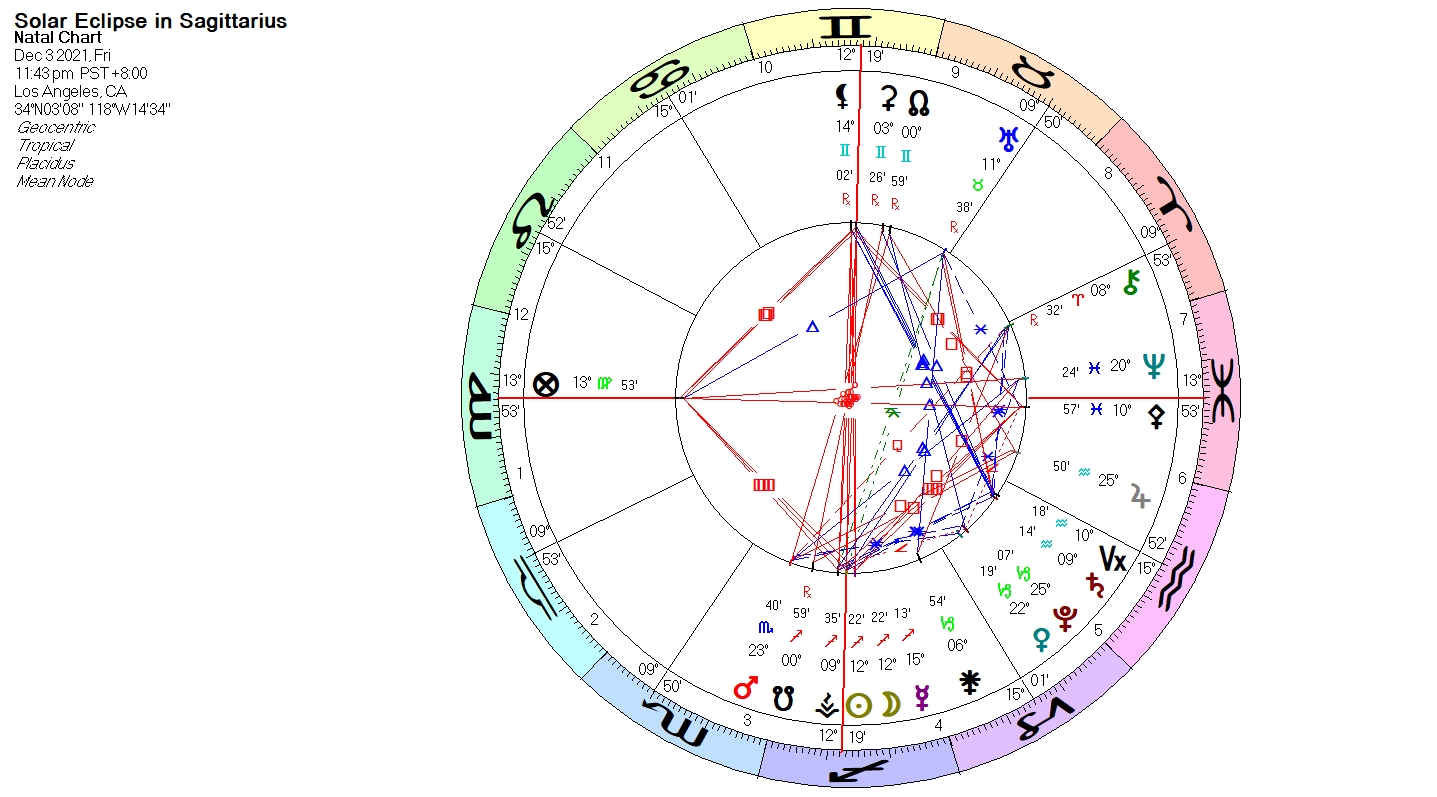 For the Tri-Cities in Washington, and the west coast of the United States this solar eclipse is angular (which means it has a great intensity related to manifested experiences) in the 4th house of family and home.  This symbolically is powerful also related to crossing boundaries, whether it is at home, perhaps a long journey to find home, or traveling to distant places takes unusual turns, but a lapse in judgment can be an issue if crossing any boundaries. This can happen unexpectedly and the timing of it will lead to a shift, perhaps for some quite unexpectedly.  Jupiter, the ruler of Sagittarius, is in Aquarius at 25 degrees 50 minutes in the sixth house of service. Also the 6th house from a traditional astrology lens archetypally we see a chance of accidents or an unexpected illness. Do not worry, be empowered to align with your astrology, draw back the veil to get to know your connection to life through the language of astrology.

As with any eclipse period of time, there is heightened tension between the two eclipses.  It may also be experienced spiritually within the inner world in seeking answers to some of life’s bigger questions that changing times often stimulates from within us.  The planet Mercury is nearby within 3 degrees of this eclipse, so it will be felt and experienced dramatically too. Communications, traveling, learning or fact-finding can be polarized or a truth rising that changes the storyline. Mercury is very important as it rules the moment (on the west coast) and it rules the Midheaven and what plays out publicly, though it is in the 4th house in the planetary transiting moment. New insights can seed a new belief as other beliefs or philosophies that do not make sense shift and fade.

Mars in Scorpio at 23 degrees is separating from its trine with Neptune in Pisces.  Our free will choices might be made with an intense need to connect, and bond, but our approach is less than imperfect. Mars squares Jupiter in the fixed signs of Scorpio and Aquarius. This one aspect can show up as violence, Jupiter is powerful, but in Aquarius is still operating within a sign ruled by Saturn and Uranus. Mars, in its own sign of Scorpio and Pluto in a sextile, brings a psychological depth to this too. Jupiter, the ruler of Sagittarius, gets outsmarted by this Mars.

Venus will be stationary as it begins its retrograde cycle in Capricorn on December 19th at 26 degrees 20 minutes. Venus will be retrograde most of January until the 29th when it stations direct again at 11 degrees of Capricorn.  Venus, the planet that rules relationships, harmony, peace of the sign Libra, as well as sensual and practical Taurus, will be in shifting through this retrograde cycle and may be experienced as stoic sensitivities and perhaps bearing the weight of something emotionally heavy yet, it will not be invisible to many. Losses and grief may be recalled of the past year, even the past two years at this eclipse with Venus tightly conjoined with Pluto.  There could be the tendency to keep centered and going strong, as life sometimes just is that way.  Once Jupiter reaches the sign of Pisces there will be a noticeable shift in feeling.  Jupiter in Pisces will be the invitation to get out and explore and be connected with life with new hope, though it may feel challenging to do that with new obstacles related to complications of covid-19 and variants.  Jupiter re-enters Pisces on December 28th.

Saturn in Aquarius is moving toward the final exact square with Uranus in Taurus (retrograde) that occurs on Christmas Eve, December 24th at 11 degrees 05 minutes. It’s sure to complicate the day with tensions and unexpected upheaval. Uranus is quite unpredictable, but it does bring us breakthroughs and new chapters that are ripe to be realized in our experience.  Knowing this, act in goodwill. Kindness always is the best route to take.  May this solar eclipse be a release that allows a metaphorical deep and cleansing exhale with a pause so as we bring in our next in-breath of life we are refreshed, made new, and it fans our inner fire toward a new spiritual appreciation for living. Bless this moment. Namaste. 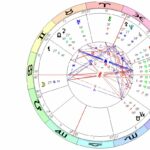 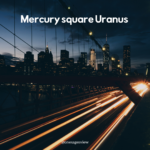 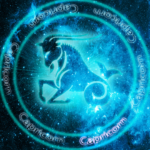